Mitt Romney said, “Freedom requires religion just as religion requires freedom. Freedom opens the windows of the soul so that man can discover his most profound beliefs and commune with God. Freedom and religion endure together, or perish alone…

“We are a nation under God, and in God we do indeed trust. We should acknowledge the Creator, as sis the founders, in ceremony and word. He should remain on our currency, in the Pledge, and in the teaching of our history.” He delivered this speech at the George Herbert Walker Bush Presidential Library, in Texas.

I wonder what the nonreligious nations of Europe would have to say about this. Especially since those nations with the less religious affiliation and influence are also happier according to their gross national happiness index. And why is it that the more religious nations tend to be less free and are less happy? 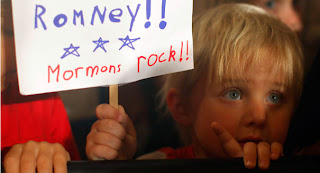 Are non-Mormons, non-Christians and non-theists still Americans under the vision Mitt Romney has for America? And what kind of America is Mitt Romney envisioning? What kind of freedom does his religion create and allow? He speaks of freedom and religious liberty, of family values and moral vision. Yet he would cut all funding for Planned Parenthood because a fraction of their public health services include providing abortions, and even when they use no public funding for those abortions. He wants to enact a federal law that would ban gay marriage. Yet this is in no way attached to his Mormon beliefs right? He speaks of “moral pollution.” He says he is “concerned with the drug culture, the pornography, the violence, sex and perversion.” He says every computer sold in the future should block all pornography. He says he wants to enforce obscenity laws. This is ironic considering that multiple studies have shown that “conservative religious type, especially Mormons, are more likely to use porn.” – Adam Greenwood (March 2, 2009).

Mitt Romney lives in his religious bubble. He will make public policy decisions based on his limited and exclusivist idea of morality and social order. It was not long ago that George Bush Sr. said, “I don’t know that atheists should be regarded as citizens, or should they be regarded as patriotic. This is one nation under God.” Those with no religious affiliation, whether atheist, non-theist or agnostic, represent 19% of the American population.  It’s time to get religion out of politics. Its time to take religion completely out of the public sphere. It’s time for nonbelievers to come out of the closet! It’s time to acknowledge and celebrate our secular heritage, our pluralistic heritage. It’s time for those with so called religious values to stop pushing their views onto other people. It’s time for a secular ethics that encourages dialog and conversation to take the place of misguided and outdated moral certainty.