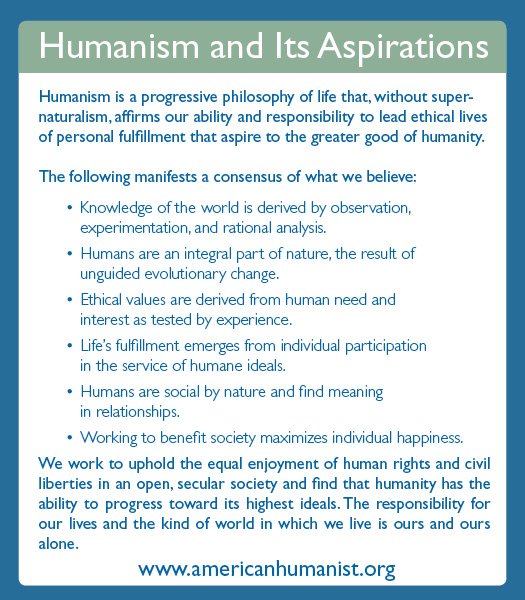 Bam. This is the newly updated manifesto of humanistic philosophy. A few things really stand out for me. In the opening statement, it says explicitly "without supernaturalism". This may bother some people, both religiously inclined and perhaps those who would prefer the label of spiritual. Fact of the matter is, supernaturalism has no bearing whatsoever in the collective interest of society in terms of building a cohesive and ethical system in which to live. If you disagree, please argue your case.

Humanism aspires "to the greater good of humanity". This naturally curtains any racist, sexist or other form of discrimination based on human circumstance. Religion, as well all know, is the best at excluding others based on circumstance, whether its based on skin color, gender, sex, nationality, a different idea and symbol of the divine, or even just a different name for the same or damn near similar idea of God. The in-group/out-group dynamic has no place in humanism and it does everything in its power, from the very foundation of its ethical system, even down to its name and label, to avoid any possibility of discrimination on circumstance.

This obviously is something we can spend a lot of time talking about and dissecting. But for newbies to humanism who constantly ask me "What's that?" or "What did you say you were?" Here is your answer. Humanism 101.