Once again i have come across some interesting stats from the Pew Forum on Religion and Public Life. There seems to be a pattern that most assume in voting trends and political and religious affiliations. Generally speaking, religiously inclined people tend to vote more often, and they tend to identify with the Republican Party on social issues such as homosexuality, prayer in public schools, abortion rights, sex education, gays in the military, contraceptives and others. Perhaps party differentials may not be as divisive on issues such as the size of government, and economic and foreign policy issues? However, these issues may play a part, perhaps their role is less important to religious voters than social issues are? Or, perhaps social issues have been downplayed and are a much larger and important issue in the eyes of the average religious voter, being on par with issues such as economic and foreign policy? Here are some stats that may address these assumptions:
First and foremost, this first stat correlates religious affiliation with presidential voting in the last three races of 2000, 2004 and 2008.

Jewish, Other faiths and Unaffiliated (which includes nonbelievers) overwhelmingly vote for the Democratic Party. On the flipside, White Protestant/Other Christian and Evangelical/Born-again demographics tend to favor the Republican Party. While Protestant/Other Christian tends to slightly favor the Republicans. In this regard, the basic assumptions of religious affiliation and party identification are sound.

Those who attend worship services more often are more likely to identify as Republican and vote accordingly. Those who never attend or attend a few times a month or a few times a year tend to favor the Democrats. Again, our initial cultural assumption is accurate.

Those who favor the Democratic party are a much less percentage of the total voting pool than those who favor the Republicans. The Jewish, Other Faiths and Unaffiliated are a drastic minority of the electorate. While the Protestant/Other Christian, White Protestant/Other Christian, Catholic and Evangelical/Born-again groups are a much larger percentage of the electorate. This leaves the demographics that largely and consistently favor the Democratic are at a distinct disadvantage to the more religiously oriented groups that favor the Republicans. Once again, our initial assumption holds. 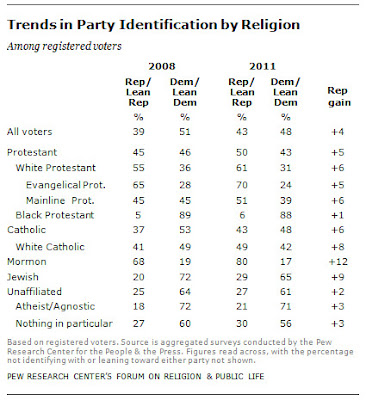 Here we see our initial assumption laid out but with a general trend towards Republicanism. Mormons, Black Protestants and Evangelical Protestants vastly vote Republican while Unaffiliated and Jewish largely vote Democratic. Here we can clearly see a divisive trend in party identification that is defined by religion. What is it that binds these religious demographics to the Republican Party? It seems that it's the large elephant in the room. Mormons, Black Protestants (who overwhelmingly reside in the conservative south) and Evangelical Protestants can have any variance in opinion on foreign policy, on domestic economic policy and the general size of government. However, they all largely agree on social conservatism, namely how they view women, abortion, contraceptives, homosexuality, gays in the military, the role of religion in public life such as prayer in public schools and religious displays on public property like courthouses. Even in this current Republican primary, Rick Santorum, who appeals to these prejudices, has won in states that house more socially conservative religiously affiliated folks. I seem to think that those who are more socially conservative in their religious affiliation tend to come from areas of the country where diversity and pluralism in religion tends to be rather small. This is another general assumption, but perhaps i can find information to back this claim up. Does living in a more diverse and pluralistic social environment foster socially liberal thinking and corresponding political party identification?
Posted by dan.j.michels at 12:57 PM